I miss the traditional Thanksgiving hymns. I’m talking about songs such as “We Gather Together,” “Come, Ye Thankful People, Come,” and “Now Thank We All Our God.”

Perhaps you don’t know them. But for nearly all my life, those were the songs of November—especially on the Sunday before Thanksgiving—in my local church experience.

In the last few years, however, it seems—at least in my limited experience—as though we’re losing the music of Thanksgiving.

In some churches, of course, there’s been a wholesale abandonment of traditional worship music. And indeed, it was time for a lot of it to go. But some churches have decided there’s no place at all for any of the music written and sung by previous generations of believers.

I once spoke in a church where a conscious decision had been made never to sing anything more than five years old. Do we really want to raise a generation of Christians (who will then influence succeeding generations) who do not know “A Mighty Fortress Is Our God” and “Holy, Holy, Holy”? Of course not.

Perhaps another, less evident reason for the disappearance of Thanksgiving music is the growing distance for most people from the awareness of the harvest season and its importance. We never see crops planted, grown, and harvested, not even from the car window on our commute to the office.

Our great-grandparents were raised on farms. Today most of us live in urban areas. But for people who live close to the land, harvest is the satisfying culmination of long months of labor and a reason for gratitude and celebration. Christians whose livelihood and local economy are directly tied to harvest probably sense the fitness of singing the traditional Thanksgiving hymns better than those whose pantry and paycheck are always the same regardless of the amount of rain or the price of corn.

Don’t get me wrong: I love Christmas music. I’m ready to sing it from the first Sunday after Thanksgiving through the whole month of December. Indeed, it’s appropriate to celebrate the birth of Jesus (as well as His resurrection) in our worship music every month of the year.

I enjoy “secular” Christmas music, too. I’ll play “White Christmas,” “Feliz Navidad,” and “It’s Beginning to Look a Lot Like Christmas” around the house and in the car about as soon and as often as anyone.

In fact, I’m guessing that the enduring popularity of all forms of Christmas music (both Christian and secular) in the general culture is a big reason why even the most radically contemporary churches haven’t totally abandoned traditional Christmas carols. When believers hear secular radio stations and the sound systems at shopping malls play Bing Crosby crooning “O Come, All Ye Faithful” and John Denver singing “Away in a Manger,” they’ll have no problem singing those old songs at church.

Second, there’s much more good music about the birth of Jesus to sing (and that should be sung). Our hymnals contain ten great Christmas songs for every Thanksgiving hymn. Of course, more Sundays are devoted to the anticipation of Christmas than to Thanksgiving, so fewer Thanksgiving songs are really needed.

A call for new Thanksgiving music

Although this article is clearly an appeal for us to retain the best of the traditional Thanksgiving music, it’s also a call for the church to produce new, well-composed, theologically-rich music to anticipate singing each November. There are a few good Thanksgiving songs out there, but not very many (at least that I know).

Maybe it’s time for our brothers and sisters who are gifted in these ways to give the church some fresh, Thanksgiving-seasonal, Gospel-focused, Christ-exalting music for us to sing congregationally.

Wouldn’t it be sad if our children or grandchildren grew up without knowing “Silent Night” or “Joy to the World”? I think we should feel the same sadness if they never learn “Come, Ye Thankful People, Come” and other worship music that several generations of Christians have sung during harvest season or times of thanksgiving.

Unless you believe that all Christian music more than a few years old should be removed from the church’s worship repertoire—and if you believe this, then logically that applies even to the songs the church sings at Christmas—then join me in encouraging the recovery of the best of the traditional Thanksgiving hymns and the development of new ones. We’ve not only much to lose if we don’t, but much to gain if we do. 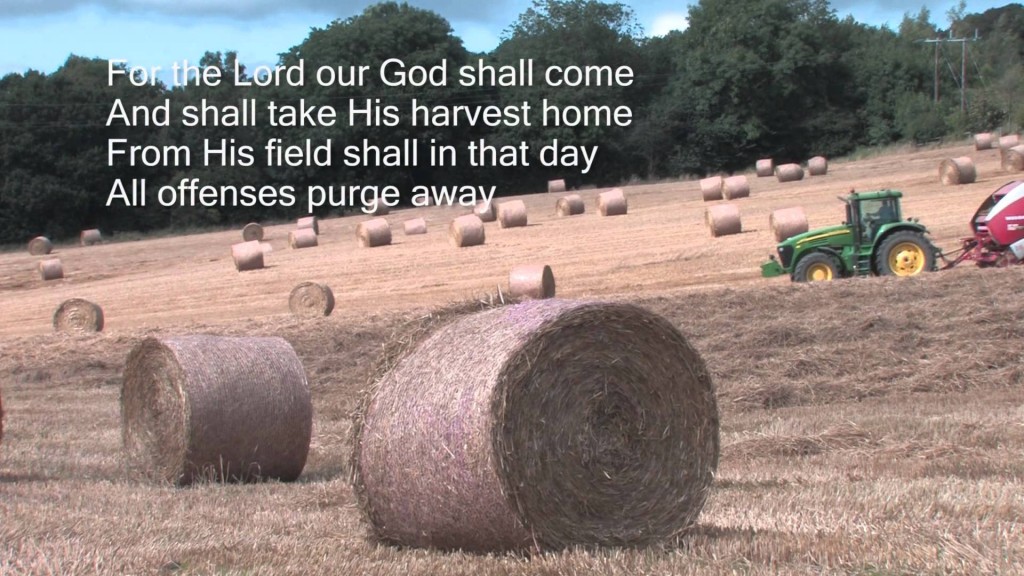