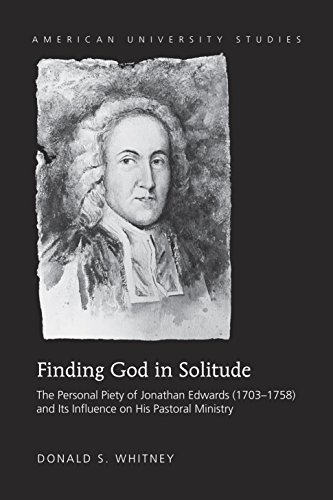 This review was originally written for the Jonathan Edwards Center at Trinity Evangelical Divinity School.

This first-ever survey of the whole of Edwards’ devotional life and its role in his pastoral ministry is a wonderful point of departure for those interested in studying Edwards’ spiritual pilgrimage. Its author, Donald Whitney, is Professor of Biblical Spirituality and Associate Dean of the Southern Baptist Theological Seminary in Louisville, Kentucky. His central question in this volume: “What were the private devotional practices of this internationally known religious figure from the American colonial period, and to what degree did these private practices impact the public aspects of his pastoral ministry?” (p. 1). The “aim” of his research was “to show that Jonathan Edwards was a man of sincere and intense personal piety and that there was a highly contributory relationship between his piety and the implementation of his pastoral ministry” (p. 131).

By “personal piety,” Whitney means “the habits of devotion in which Edwards’ engaged privately or with his family in the seclusion of their home, and not . . . his participation in public or congregational expressions of religion” (p. 2). Further, “piety represents devotional piety” here, “that is, the acts and habits of Christian devotion practiced in the pursuit of a deeper knowledge of an experience with God, as well as greater conformity to the internal and external example of Christ. Thus piety is not used here as a comprehensive term referring to the aggregate of a person’s beliefs and actions that are distinctly Christian, but more narrowly of [sic] those non-public practices intended to draw the heart and mind of the individual believer nearer to God and to develop authentic Christian beliefs and actions” (pp. 3-4).

This is a book, simply put, about Edwards’ private devotions and their bearing on his ministry. Those involving the Bible and prayer proved the most important to Edwards, but he engaged in many other pious practices as well.

The book includes an introduction, three chapters, and a conclusion. The introduction defines Whitney’s own approach to Edwards’ piety and places it in relation to both the piety of the Puritans and the history of Edwards scholarship. Chapter one, “The Life and Work of Jonathan Edwards, with Emphasis on His Piety and Pastoral Ministry,” scans Edwards’ devotional writings and behavior biographically. Chapter two, “The Personal Piety of Jonathan Edwards,” peers more deeply into Edwards’ theo-centric sensibility, prayer life, journaling, fasting, solitude, family worship, and so-called mystical spirituality. Chapter three, “The Pastoral Ministry of Jonathan Edwards,” discusses the ways in which Edwards’ devotional life funded his ministry. The conclusion sums things up and assesses their historical significance.

There is not much here that will be new to Edwards specialists, and Whitney might have made better use of the work of others who have written on this subject (such as Charles Hambrick-Stowe, Clark Gilpin, Richard Lovelace, Glenn Kreider, and Peter Beck). But there is a great deal here that will be helpful to those seeking an introduction to Edwards’ devotional life, or seeking inspiration to deepen their own walk with God.

In our age of rampant excess, Whitney’s treatment of Edwards and fasting might prove to be the most convicting feature of this book. Edwards’ disciple, Samuel Hopkins, said that Edwards “often kept days of fasting and prayer in secret.” And, as Whitney has reminded us, “Edwards believed that ministers, as they were to be examples to the flock, should especially feel responsible to discipline themselves to fast. He said as much in Some Thoughts Concerning the Present Revival, when he observed, ‘I should think ministers, above all persons, ought to be much in secret prayer and fasting, and also much in praying and fasting with one another.’ In his ‘Blank Bible’ notes on Matthew 17:21, Edwards summarized succinctly, ‘fasting is a part of Christian worship’” (pp. 94-95).

How many Edwards fans today are making good on this advice?

Purchase Finding God in Solitude: The Personal Piety of Jonathan Edwards and Its Influence on His Pastoral Ministry