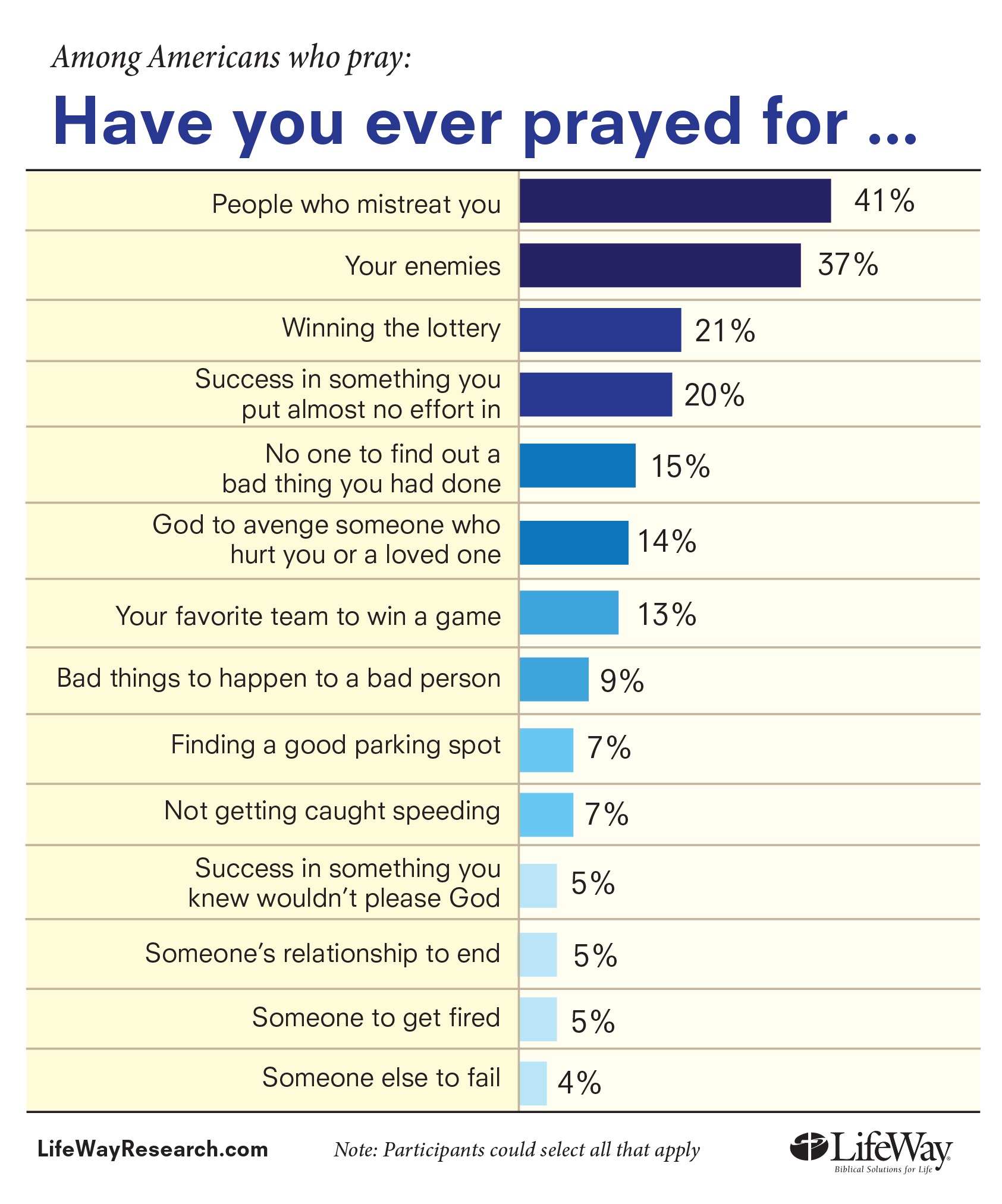 Have you ever prayed for bad things to happen to someone? No? Well, about one in ten Americans who pray ask that very thing.

That’s according to a recent survey reported by Baptist Press.  On August 7, 2014, Lifeway Research conducted an online survey sponsored by popular author and Texas pastor Max Lucado, asking 1,137 Americans about the frequency and content of their prayers.

Some of the results are amusing, such as the fact that 13% pray for their favorite team to win a game. That raises the interesting question of the dynamics in the spiritual realm when, say, here in Louisville some are praying for the U of L to beat Kentucky while Wildcat fans are praying just the opposite.

Some of the results are surprising. For example, 25% say that all their prayers are answered. Seriously? The best interpretation of this is that these respondents mean that each prayer is answered in the “yes, no, or wait” sense, and not that they always get what they ask for. But from the rest of the data I wouldn’t have expected this many participants to provide an answer that reflects that level of theological sophistication. 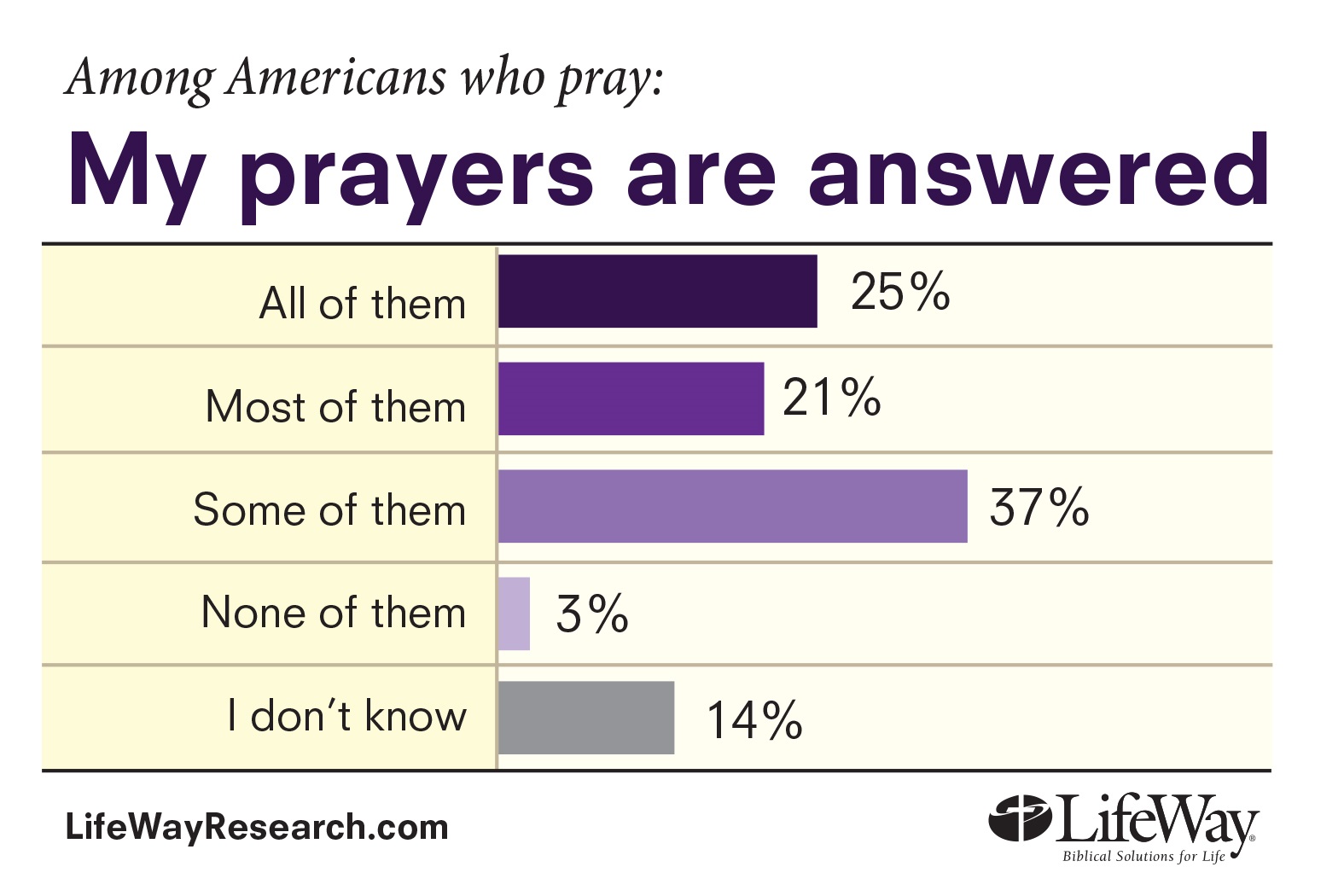 Some of the statistics, though, are downright disturbing, such as those who pray for “success in something [they] knew wouldn’t please God” and nearly twice that number who pray for “bad things to happen” to certain people.

The most useful information gleaned from this survey is what it reveals about people’s beliefs when they pray, not anything it implies about the validity of prayer. As with every such survey or “scientific study” of prayer that I’ve read, this one also does not address the most important biblical conditions for answered prayer.

To begin with, Jesus said that no one comes to the Father except through Him (John 14:6), and Hebrews 10:19 emphasizes that we “have confidence to enter the holy places by the blood of Jesus.” Proverbs 28:9 makes clear that standing with God is not achieved by prayer, for “If one turns away his ear from hearing the law, even his prayer is an abomination.” In other words, the Bible teaches that those who turn their ears from hearing God’s Word–especially when it speaks of the good news of Jesus Christ as the way to God–will find that God turns His ear from hearing their prayers.

Ed Stetzer, executive director of LifeWay Research, acknowledged this when he said that many of those who responded to the survey may not have a prayer life “rooted in a relationship with God.” Dr. Stetzer is a friend and I’m certain he would never say that those without a relationship with God through Jesus Christ can expect to have their prayers answered in the same way as those who do enjoy that relationship. 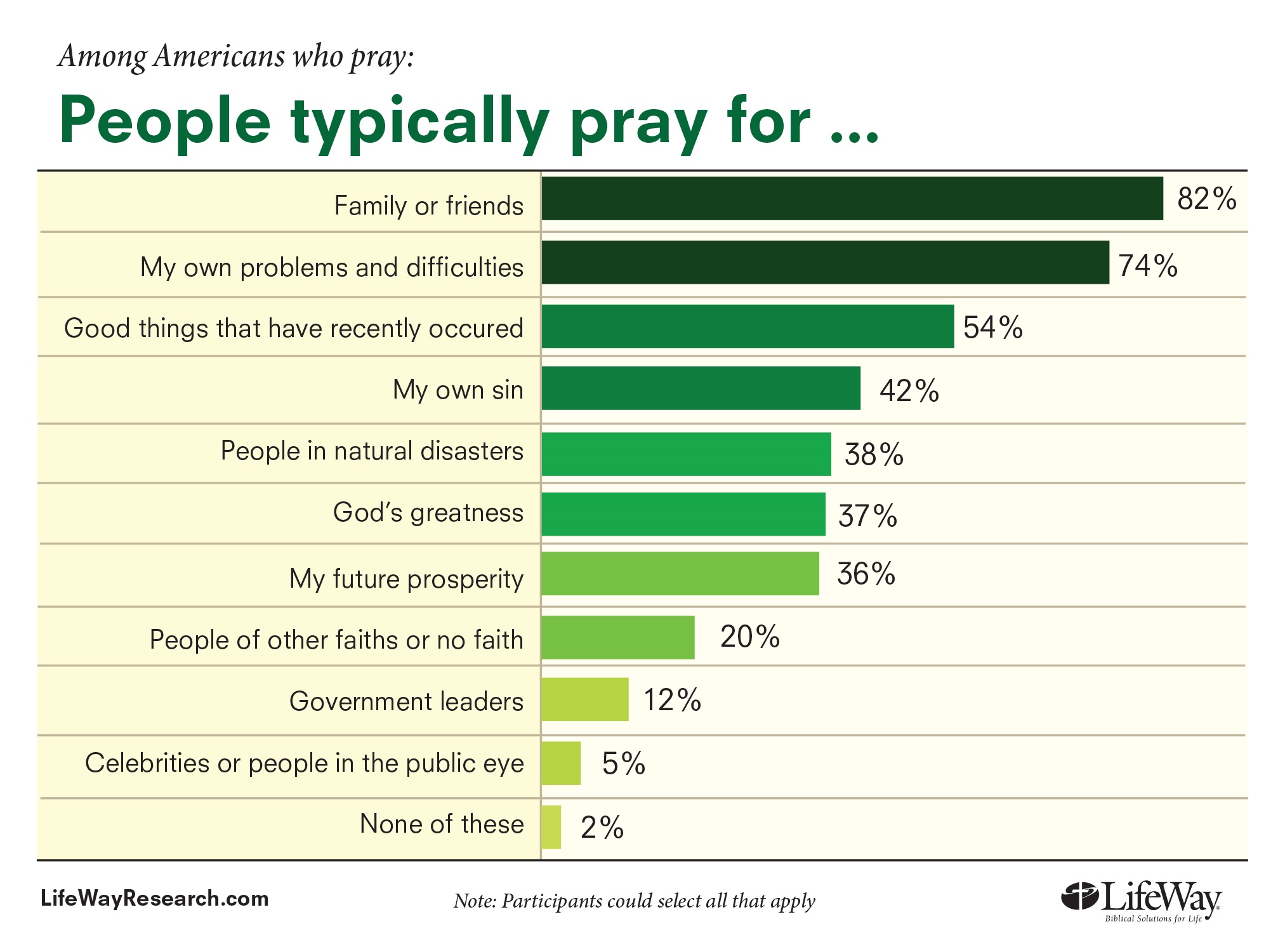 Then what about those in this study and in our own circle of relationships who aren’t Christians but who are convinced that God has answered their prayers? I know people who claim dramatic answers to prayer, but who feel no sense of need for a savior from sin and who have no hunger for the Word of God. Nothing will convince them that the “miracle” they experienced was unrelated to their prayer.

In fact, if the “miracle” was indeed an answer to prayer, it is more likely that the prayer God answered in that situation was offered by someone else, someone who came to the Father through Jesus (John 14:6) about the matter. Or it may be that the “answered prayer” was simply what God in His providence was going to do anyway and the unbeliever’s prayer had nothing to do with it. The extremely rare cases in Scripture where God answers the prayers of unbelievers are answers, like that given to Cornelius in Acts 10, which served the plan of God in saving people.

At the very least we can say that we have no biblical basis to assure anyone outside of Christ that God will answer any of their prayers except those related to His offer of forgiveness through Christ.

Are All Prayers Created Equal?

A second problem with surveys and studies about prayer is that those who do have standing with God through Christ sometimes “ask and do not receive” because they “ask wrongly” (James 4:3). So not all prayers are of the same quality, even by those whom God welcomes for Jesus’ sake. Therefore it’s a mistake to evaluate all prayers–even those offered by God’s own people–as though they are equally acceptable.

In the end, surveys like this one which do not take into account a person’s relationship with God (or lack of one) and the biblical validity of their prayers may be interesting, but prove nothing about the efficacy of prayer.

And the reality is that no survey or study can prove that prayer “works” (or doesn’t), for the movements of the spiritual realm defy quantification. I read one study which emphasized that all participants claimed to be born again, that is, they asserted that they had a relationship with God through Christ. But Jesus said that many who claim to know Him actually do not (Matthew 7:21-23). So the best that research could affirm is that all participants were professing Christians, and on that basis alone (though there were others) the findings of the entire enterprise were invalidated.

Science simply cannot develop an MRI capable of determining the state of a heart before God or the acceptability of a prayer to God.