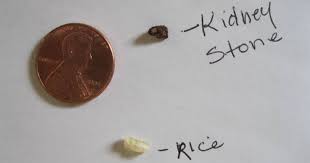 I had a kidney stone a few days ago. More specifically, my right kidney rebelled against the rest of my body and impaled itself on a kidney stone six days ago. And in its infinite kidney wisdom the kidney decided to do this at 2:00 in the morning.

By 3:30 a.m., Caffy was driving me to the nearest emergency room. And I do mean nearest. If Mayo Clinic had been but a mile further, I would have interrupted my groaning long enough to jab my finger toward the first ER and screamed, “No! There!”

It’s been almost twenty years to the day since my last kidney stone. I have to say that I’ve not missed the experience one bit. Prior to that I’d had several.

I was sixteen when I entered the joy-filled world of kidney stone alumni. My doctor told me that to his knowledge I was the youngest person in the history of our town of 8,000 ever to become a member of that fraternity. I remember him saying, “It’s all downhill from here. You won’t feel pain like this when you die.”

Another memorable appearance of the accursed stone occurred one Sunday morning in my mid-30s while I was pastoring in the Chicago area. I doubled-over in pain during a prayer meeting with the deacons just before the beginning of the worship service. They shoveled me prone into the back of a station wagon and took me to the hospital. I was in agony, but I had the satisfaction of being the best-dressed man in the ER.

My most recent one—the one twenty years ago—hit me with body blows on and off for several days before delivering the knockout punch that landed me in the emergency room. One wave of dull pain struck while I was teaching a classroom of seminary students. It wasn’t yet severe enough to go to the hospital, but I had to lie on the floor to complete my lecture. I’d like to see the class notes of the students from that day.

My nurse at the ER last week confirmed what every woman who’s endured both experiences has told me: having a kidney stone is more painful than having a baby.

If fully human, could Adam and Eve have had kidney stones in the Garden of Eden?

All this has made me ponder the age-old question I’m sure every theologian wrestles with: Before the Fall, could Adam and Eve have had kidney stones?

I’m inclined to say no, because the Bible gives no indication of suffering in the Garden of Eden before the entrance of sin. But my question is more of potentiality: since Adam and Eve were fully human, was it possible for them to have a kidney stone?

[Okay, so in the aftermath of a kidney stone when you’re pumped full of drugs, you think about weird things. But if you weren’t similarly interested in such things you wouldn’t still be reading this!]

It seems to me that if there could have been no kidney stones in the Garden of Eden, at least one of three things had to be true.

First, the external factors leading to kidney stones may have been absent. Food and stress, for example, would not have led to the formation of stones. Whether it’s certain types of food we eat today, additives to the food, and/or the processing of the food that contributes to kidney stones, these would not have been a part of Adam and Eve’s diet. And as to stress, it hadn’t been invented yet.

A second possibility is that the bodily processes that produce kidney stones nowadays were different before sin changed everything. In other words, on the microscopic level our first parents’ kidneys may not have functioned in every way as ours do today.

For instance, suppose that we know that a particular fruit presumably present in the Garden of Eden causes kidney stones in people today. Even so, in this scenario the way Adam and Eve’s bodies interacted with that fruit then would be different than the way people’s bodies did after the Fall. The fruit would have passed harmlessly through their bodies though the same fruit produces kidney stones in our bodies, similar to the way some people can eat peanuts with no problems while others will die if they swallow just a handful.

Finally, it may be that while Adam and Eve, with the right combination of factors, could have developed and suffered kidney stones, they did not simply because God protected them from those factors. He ensured that they did not become excessively dehydrated, eat anything harmful, etc.

Whatever may have been true about the absence of kidney stones back in the Garden of Eden, they are very present in the present. Theological speculation about Adam and Eve’s potential for this urological torture does nothing to ease the pain of someone writhing in an emergency room with it. In this fallen world and in these sin-spoiled bodies, the plain fact is that many of us will groan with the stones.

But what about the future? On the dark side, while in agony I did have moments when I thought, “What if I had to suffer like this forever, with no hope of relief?” More unbearable than the kidney stone pain was the thought of repeating forever what one man was described by Jesus as crying, “I am in anguish in this flame” (Lk. 16:24). That’s not to say that I think there will be kidney stones in Hell, but to say that if I could barely withstand three hours of non-stop pain, I cannot conceive of an agony that endures forever.

On the other hand, my thrashing on the ER bed was occasionally punctuated by thoughts of the hope that because of the Gospel of Jesus Christ I will someday have a new body that will never experience pain again and will live in an eternal world of joy.

Jesus, who had lived in that world and had never known pain, willingly became a man with a body that could experience pain and lived in a world full of pain. He accepted the unspeakable agony of the Cross so that we might be delivered from this body and world of pain, and enter the indescribable joy of His presence in glorious, pain-free new bodies.