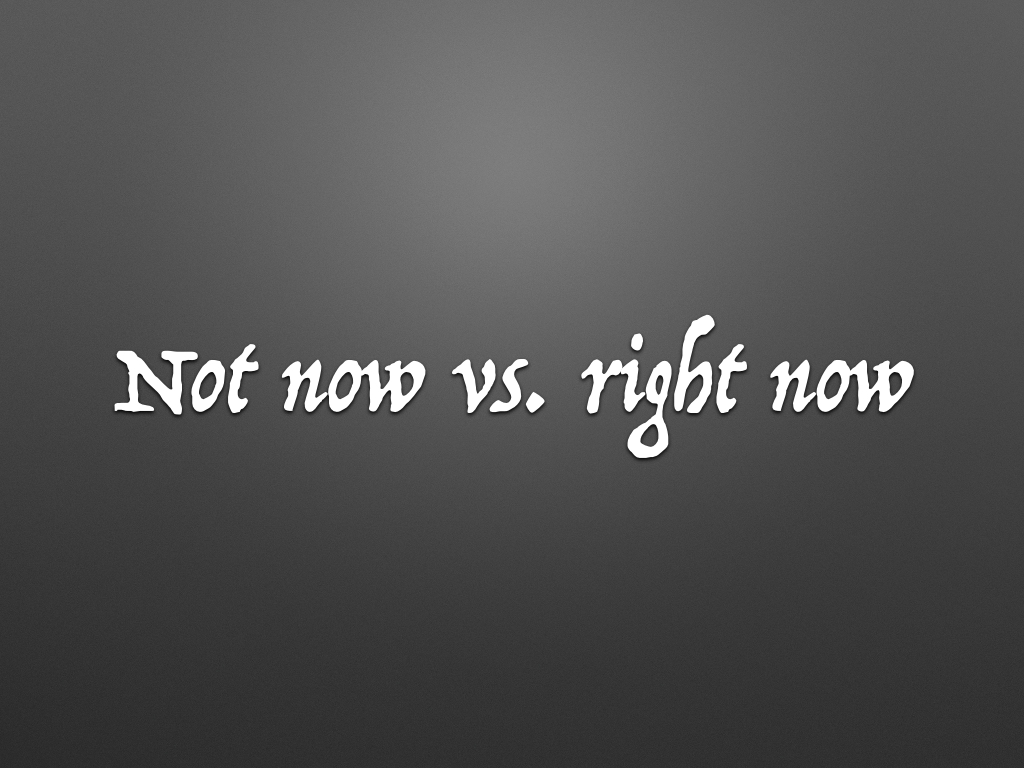 I thrill to read of the 3000 saved when the Apostle Peter preached in Acts 2 on the Day of Pentecost. I glory in reading of people coming in great numbers to Christ when George Whitefield, or Jonathan Edwards, or Charles Spurgeon preached. I believe such spiritual harvests actually happened as reported.

And I pray for and sincerely believe that there will come another day of spiritual harvests like these. But too often my difficulty is believing that such a response to the Gospel like that can happen right now.

This is exactly the problem Jesus addressed in John 4:35 when He said to His disciples, “Do you not say, ‘There are yet four months, then comes the harvest’? Look, I tell you, lift up your eyes, and see that the fields are white for harvest.”

Many Christians have the “not now” view about expecting to see people converted to faith in Christ.

The disciples’ mistaken attitude, as portrayed by Jesus, is revealed in their viewpoint, “There are yet four months, and then comes the harvest?”

• The “not now” view believes God has saved many in the past and will again in the future, but “not now.”

The disciples had seen God work through Jesus to touch lives in the past, and at this point in John 4 they had an incredibly optimistic view about what God was going to do in the future. But they didn’t expect Him to do anything at the moment. They were in Samaria. The enmity between Jews and Samaritans was little different then than between Jews and Palestinians today.

The disciples didn’t consider these Samaritans likely to be interested in their message about a Jewish Messiah. So the disciples weren’t thinking of a harvest here. They were between Judah in the south, where Christ had done great things in the past, and Galilee in the north, where Jesus would certainly do great things in the future. But they didn’t expect anything to happen in Samaria, at least not now.

I’m prone to the same kind of unbelief. My preacher-hero, Charles Spurgeon, described my lack of faith almost a century before I was born:

Many unbelieving Christians have a very large stock of reasons for not expecting to see many conversions. They suppose that any present manifestation of divine power in connection with the truth is not to be expected. They read the history of past ages and they wonder, and sometimes, when their eye is sufficiently clear, they look forward with some sort of hope to the repetition of these scenes in future years, that is to say, when they themselves are dead and buried, and a new age shall have come upon the world. But as to God working any wonders in the world now, as to the conversion of thousands now, they do not expect it; and if it were to happen they would be surprised, and beyond all measure astonished. They are for ever dwelling in the past, or seeking to roost in the future; but as for now, now seeing God’s arm made bare, now setting to work for the conversion of men, now expecting that God will win hearts unto Himself, they are not brought up to this mark yet. Their common reason for expecting nothing now is this; that there are yet four months, and then cometh harvest. They say, “This is not the time; we must have patience; we must wait; this is not the man; this is not the hour; this is not the place; we must wait till, under other circumstances, other men being given, we look for grander results; but we must not expect them now; there are yet four months, and then cometh harvest.”[1]

We can believe God blessed better men and better preaching in the past, and we can long for the purity of doctrine and practice that was theirs. We can pray for a future day of reformation and revival such as our heroes of the past saw. But as for our own day, our own denomination, our own town, our own church, our own preaching, it’s so easy to unbelievingly think, “not now.”

• The “not now” view believes God sends only special harvest times, not a constant one.

Some think that Jesus wasn’t saying in John 4:35 that there will always be a ready harvest, but rather that there will be only special times of harvest, such as the one about to be seen among the Samaritans, who were approaching at that moment.

And we know by history and experience that there is some truth to this. There are “harvest seasons” which are often preceded by periods, sometimes long periods, of sowing and watering.

Samuel Stoddard, for example, the grandfather of Jonathan Edwards and the man Edwards came to assist in Northampton before assuming the pastorate there, spoke of periods of harvest. In Iain Murray’s biography of Edwards, he writes of Edwards describing his grandfather’s ministry saying, “[Stoddard] referred to five periods of special spiritual awakening–‘five harvests’, was his grandfather’s phrase–which saw ‘the conversion of many souls’.”[2] William Carey and Adoniram Judson certainly experienced this on the pioneer mission field.

But Jesus doesn’t seem to be teaching about taking advantage of a unique opportunity. To be willing to give the Gospel when people are standing in line for it is obvious. He’s teaching us that the “not now” view is not right. He wants us to come with the attitude that the fields—all fields, for “fields” is plural—are always white for harvest.

Instead of the “not now” view of the harvest, we need the “right now” view. I’ll write about that in the next post, God willing.