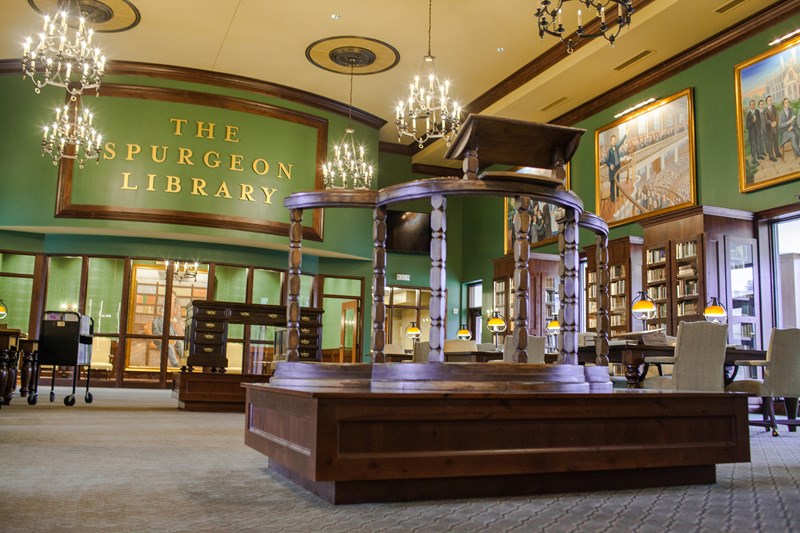 On October 20, 2015, I was honored to attend the dedication of the new C.H. Spurgeon Library at Midwestern Baptist Theological Seminary in Kansas City, MO. Midwestern is one of the six Southern Baptist Convention seminaries and one of America’s fifteen largest. I was privileged to teach there for ten years before I was invited to my present position at Southern Seminary in Louisville.

MBTS has enjoyed the evident blessing of God ever since the election of Dr. Jason Allen as president three years ago. The school has seen record enrollment, unprecedented financial support, and a remarkable transformation of the campus under President Allen’s leadership .

What will surely stand as one of the most enduring aspects of his legacy at Midwestern is the conception and construction of the Spurgeon Library.

Charles Haddon Spurgeon is still widely considered “the Prince of Preachers.” He pastored in London at what became the largest evangelical church in the world for 38 years until his death in 1892. During his lifetime his was acknowledged as the best-known name in Christendom. Through his monumental, 64-volume Metropolitan Tabernacle Pulpit sermon collection and more than 120 other books, he remains one of the most influential Christians of all time.

A voracious reader, Spurgeon amassed an enormous, 12,000 volume library. After his death in 1892, Spurgeon’s twin boys—both of whom were preachers—made personal selections from their father’s books. Through an interesting set of circumstances, the remainder of the library was sold in 1906 to the Missouri Baptist Convention and housed in the library of William Jewell College in Liberty (suburban Kansas City), Missouri. There sat Spurgeon’s books, largely ignored, for an entire century.

In 2006, Midwestern Baptist Theological Seminary, under then-president Phil Roberts, purchased the library for $400,000. When Jason Allen was elected in October, 2012, he made a priority of giving greater visibility to this unique resource. Sharing this vision with Allen were Bill and Connie Jenkins of Indiana who provided the significant financial resources necessary to fulfill the master plan for the library.

Part of this plan was the complete renovation of the former seminary chapel building, which the seminary has renamed Jenkins Hall. This magnificent metamorphosis (and permit me to give a shout-out to our dear friend, Yvette Conte, who is responsible for most of the interior design) houses the books themselves, Spurgeon’s preaching rail, one of his desks, and many other pieces of Spurgeonalia. The building also contains offices, a recording studio, and more. To fulfill its primary purpose as a study center, the Spurgeon Library is beautifully appointed with a dozen large research tables surrounded by large, comfortable chairs and topped with classic reading lamps.

Another part of the plan was a curator of the library. For this purpose Allen tapped the providentially-prepared Dr. Christian George, then teaching at Oklahoma Baptist University. During his PhD work at the University of St. Andrews in Scotland, George made the remarkable discovery of some 400 previously unpublisted sermons of Spurgeon’s from the earliest days of his ministry. These are scheduled for publication in 2017 by B&H Academic in a ten-volume, annotated edition that will serve as a lasting contribution both to Spurgeon scholarship and to the church in general.

It’s hard to imagine how the day of dedication for the library could have gone better. Dr. Mark Dever, pastor of Capitol Hill Baptist Church in Washington, DC spoke in chapel with the first of his two presentations for the third annual Spurgeon Lectures on Preaching. That was followed by a ribbon-cutting and dedication ceremony. At this event, we heard from the wife of Spurgeon’s great, great, grandson as well as their daughter. Both made timely, Christ-centered remarks which prompted Dr. Allen to say (to the agreement of all) that Spurgeon would have been well-pleased with their comments.

Next came a barbecue lunch and a panel discussion. It was my privilege to be a part of that panel and address questions by Dr. Allen about Spurgeon’s productivity, devotional life, relevance for preacher’s today, and more. Pictured are Jason Allen, Jason Duesing, Christian George, Mark Dever, and myself. 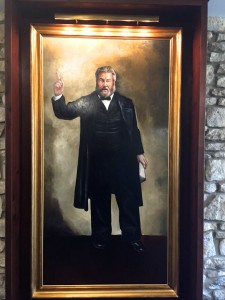 Actually, I was there primarily by virtue of being Caffy’s husband. She had been commissioned to paint life-size portraits of both a young and mature Spurgeon for placement at the entrance to the library. Am I permitted to say that these are really good? You can see them in various stages of development on the Facebook page for her art studio. Also on that page is a portrait of George Whitefield that hangs in President Allen’s office.

I did a significant amount of doctoral study on Spurgeon. One of the first realizations I had in the process was how little PhD-level research had been conducted on one of the most important figures in the history of the church. In other words, whereas many fields of academic study would by now offer little in terms of fresh, unplowed ground, Spurgeon studies are as wide open as was the heartland of America when Lewis and Clark paddled up the Missouri .

And now, there’s no better resource in the world to visit for research on the life and ministry of Charles Haddon Spurgeon than the Spurgeon Library. Through the library and the Spurgeon Center for Biblical Preaching, Midwestern Seminary offers fellowships as well as a limited number of scholarships to seminary students called to full-time vocational ministry. Scholars and professors from other institutions are also welcome to conduct research in the Spurgeon Library.

Whether you are a scholar, pastor, or layperson and you visit Kansas City and you love Spurgeon, be sure to set aside a few hours to visit the Spurgeon Library.